The 3 Best Paint Protection Films to Protect Your Tesla

Paint Protection Film is the finest way to extend the life of your vehicle’s paint. You us paint protection films to protect your tesla against scuffs, rock chips, and scratches because of its composition and self-healing characteristics. In addition, it protects the paint against salt, bird droppings, chemical stains, as well as UV radiation. Because of its growing popularity, numerous firms are now producing Paint Protection Film. This raises the obvious issue of which paint protection film brand to use and how to do so.

That’s fantastic. But you’ll have to choose a particular film for your vehicle now. And the answer to that question isn’t always clear. XPEL vs. 3M, SunTek vs. LLumar, or other firms like these may have come up in forum disputes.

Our investigation into this is long overdue. With XPEL Ultimate, LLumar Platinum, and 3M Scotchgard Pro series, we’ll examine and contrast three different films from the inside out.

Protect your tesla’s paint against rock chips, chemical stains, minor scratches and UV damage using all of these products at the highest level. None of them provides bulletproof security. There will never be a film or product that does this.

However, any of the three will perform an excellent job and provide equivalent security. Including the adhesive, all of these films are around 6 mils thick. They feature “self-healing” qualities, which implies that a scratch in the film will erase when you heat the film.

It’s pointless to purchase a solution that claims to protect your paint if it also degrades the appearance of your finish. These films all have the advantage of being almost undetectable after proper application. And the clarity of all of these films is superb. The fading of previous generations of films, particularly after prolonged exposure to UV rays, was an issue.

Underneath the films, discoloration was really occurring in the glue. As a result of these advancements, you can be certain that if you purchase one of these films, it will maintain its clear appearance for a long period of time and will not yellow with time.

Scotchgard Pro, from 3M, comes with a seven-year warranty. You get a 10-year warranty for the XPEL Ultimate and LLumar Platinum/SunTek Ultra products after installation. All of these movies have a solid track record of holding up far beyond the terms of their warranties. 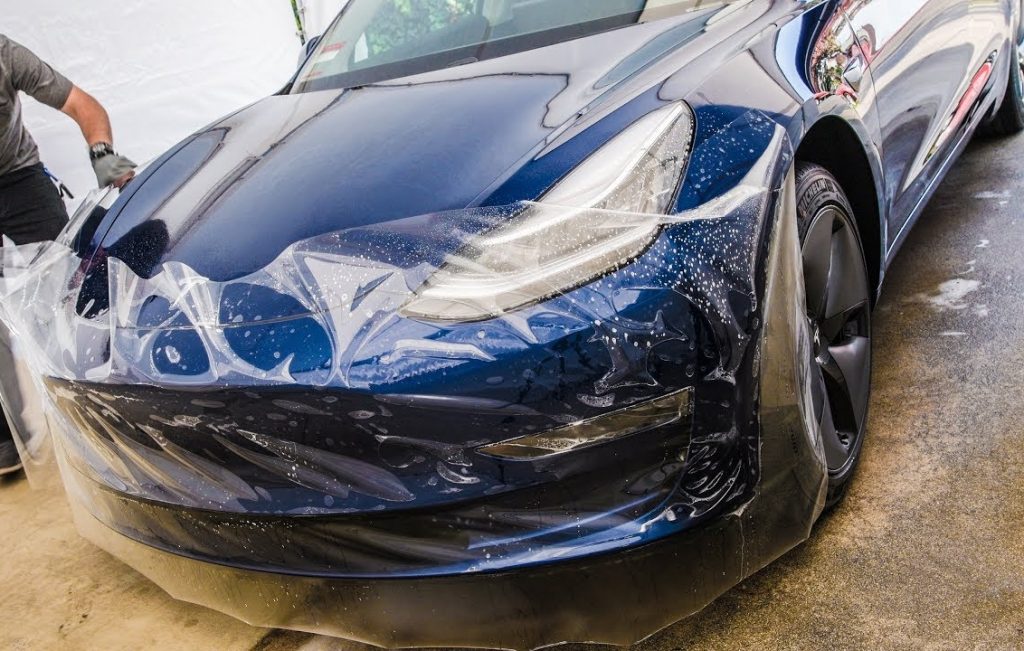 For the time being, let me state that those three characteristics are the most crucial ones to look for in a Paint Protection Film before diving into the distinctions between them.

You’re looking for a film that will provide excellent protection, won’t interfere with the paint’s appearance, and will endure for an extended period. All three films contain these elements. Any of the three films you decide to use, you’ll be satisfied with the final product.

You may choose one of these films above the others based on your preferences. What follows is a breakdown of each film’s plot points.

XPEL is generally the first name that comes to mind when painting protection film. XPEL was founded in 1997 and is the first heat-triggered self-healing PPF in the world. When heated, the 8-millimeter-thick coating on the surface self-heals.XPEL’s reputation in the paint protection film market is hard to match. XPEL is a smaller manufacturer than others, and unlike 3M, its primary concentration is on Paint Protection Film. Thus, they have been pioneers in developing Paint Protection Film inventions. “

The World’s First Self-Healing Film” was presented since XPEL is the firm that invented and mastered that technology about automobile protection films. That’s one of the reasons they’ve built such a solid name for themselves.

When researching paint protection film on vehicle forums, you’re likely to come across folks who are ecstatic with their XPEL wraps, and for a good reason!

If you’re looking for a paint protection film for your tesla, we’d recommend XPEL, a well-known brand. XPEL’s product is an 8 mil transparent polyurethane film similar to 3M’s Scotchgard paint protection film. It comes in three sizes: 6′′ by 25′′, 6′′ by 60′′, and 6′′ by 84′′.

When applied, this film is practically undetectable, even more so than 3M’s Scotchgard film. In terms of protection, it’s not as good as the 3M Scotchgard, and it’s a little more expensive.

LLumar Platinum and SunTek Ultra films claim to offer superior clarity and a higher gloss finish than other films on the market. LLumar / SunTek and XPEL / 3M may have a slightly different finish, but it shouldn’t be the decisive factor in which film you pick.

The clear top layer of this film has hydrophobic qualities, which means it repels water like a good wax or coating, which is a true and important difference from both XPEL Ultimate and 3M Scotchgard. Because the hydrophobic coating makes it simpler to clean any dirt or filth that is less likely to stick to the vehicle’s surface, the hydrophobic film is an excellent choice.

On the other hand, you can achieve hydrophobic qualities by applying Ceramic Coating on top of the film. In contrast, LLumar and SunTek already include this in their film.

As a result of its bulk packaging, SunTek’s paint protection film is ideal for covering the whole front end of your automobile or truck, including the hood. There will be enough of the film leftover if you want to use it on another vehicle or save it for a future project. You can even use the film in your home for various purposes.

SunTek’s polyurethane film is 8 mils thick and self-healing. Remove scratches and swirls that form in the film by sprinkling hot water over them. Besides gloss film, SunTek also carries matte film, which is for matte paint jobs. A 5-year manufacturer’s warranty is also included. SunTek’s film adheres more smoothly than 3M’s; however, 3M’s film does not “self-heal” as well as SunTek’s.

To protect tesla on the track, 3M invented the urethane film technology that has now grown to cover any consumer automobile on the road. As a result, 3M has been in the game the longest and has a solid reputation for producing high-quality films.

While they provide a film with hydrophobic qualities, they don’t quite have the XPEL fan following that LLumar and SunTek film have amassed. Furthermore, they give a 7-year guarantee, while XPEL, LLumar, and SunTek offer a 10-year warranty.

But if you don’t intend on keeping your Tesla for more than five years, the difference between a seven-year and a ten-year guarantee is inconsequential to you. We’ve already touched on the benefits of 3M Scotchgard Pro and these other paint protection films. They offer high-performance protection, an invisible finish and long shelf life, so let’s take a closer look. 3M is the best film to use if you want the best results.

Which PPF is the best?

Observe that we did not directly address the question in the preceding heading in any of our evaluations. There was no “best” paint protection film that we could clearly remark about. That’s because there isn’t a single “best” PPF on the market today. Whichever of these brands you pick, you’ll be delighted with your decision.

To assist your decision-making process, I’d want to assure you that there is no incorrect choice among XPEL, LLumar, SunTek, or 3M. A wide range of alternative options are open to us. However, if you go with one of these manufacturers, you’ll be protected. Your life will be secure for the first time in a long time, regardless of whatever option you select.

What are you looking for in a company?

The largest, most well-established, most well-equipped organization in the market is your best bet. So, that’s 3M. Is it important to work with a firm specializing in paint protection film with an excellent reputation? XPEL would be the correct suffix.

Both LLumar and SunTek are well-known brands in the automobile film sector, both of which have recently created hydrophobic films with the most current technological breakthroughs.

Are hydrophobic traits important to you?

If your automobile is a daily driver, having hydrophobic characteristics integrated into the film is necessary. On top of your Clear Bra, a Ceramic Coating will provide hydrophobic surface advantages, as previously described.

As a result, this question asks about your long-term maintenance intentions for your vehicle as well as your protection options beyond Paint Protection Film.

As if that wasn’t enough, our third and most important question isn’t directly related to the specifics of the movies at all.

A good installer will utilize or suggest the following third-party products.

No shortcuts exist when it comes to applying a PPF to a vehicle. That is the sum total of it. The greatest film in the world won’t do you any good if it is done incorrectly, causing blisters, bubbles, and premature peeling. There is a significant difference between a professionally done installation and one that is rushed and negligent.

If you’re looking for an installation, make sure they’re trustworthy, check at their previous work and customer ratings, and after you find someone you like, ask them which film they’re most excited about installing.

As far as flexibility and tack go, all of these films behave differently regarding the actual installation procedure. As a result, installing LLumar may not be as successful for an installer who mostly uses XPEL.

If you can find a reliable installation that only works with SunTek, it’s better to go with SunTek. XPEL, LLumar, and 3M are all worthy rivals, as are many more. If you want a good film and an excellent installation, ensure you obtain both high-quality movies. If you can obtain those two things, you’ll have the confidence that comes with knowing your automobile has the finest protection you’ll ever see, and that’s what we’re chasing.

We hope these tips for picking the right paint protection film for your Tesla provided you with some value when it comes to detailing your car. As a Tesla owner, only you know what is best for your car. If you can afford to get a car detailing, we highly recommend you do. It will make your car look amazing inside and out. Not only that, your car’s surface will continue to be protected from UV rays, dirt and debris over the next few months. If you’re on a budget or just need a quick clean then a car wash is the obvious choice. Just be aware that scratches can potentially occur even with an automatic car wash. At PAD we offer top of the line car detailing service. If you’re interested in getting your car detailed you can view our services HERE. Check out our other blog articles to get updates and learn more about car detailing.